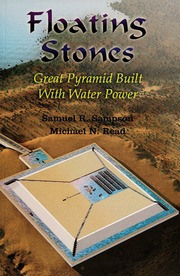 In both pyramid building and obelisks, you're kind of faced with the same problems, raising the original weights itself. Question: Why didn't workers stand on the levers when they became too high to reach in order to utilize their weight to increase the downward force on the lever? I've seen them climb up on to these heavy levers, stand on them.

But we were using levers the size of railroad ties, although maybe twice as long. They were the same thickness as a railroad tie, and it wasn't just the fact that the levers were getting too high for the men to grab hold of, it was also that maybe six inches from their butt end, the levers are snapping like toothpicks. And this is a very sobering observation, because our obelisk is 40 tons. And yet, given the shape of obelisks, a ton obelisk is not going to give you that much more room to lever, and you're not going to be able to use levers that are that much bigger, because men can't get ahold of them.

So if our railroad tie-sized levers are snapping like toothpicks on a ton obelisk on its point end, what's going to happen on a ton obelisk, even if the men were standing on them? Of course it's not—it's kind of a precarious place to stand up on a lever. Even if they were standing on them, levering begins to look a little bit inadequate to the job of the very big obelisks that we know were successfully erected by the ancient Egyptians.

Question: What other obstacles did you and your colleagues face, not including the problems of transporting and testing? The film focuses on transporting and raising, and mostly on raising. One of the big problems we faced, which must have been a problem faced by every ancient overseer, was finding a big enough patch of granite where we could quarry an obelisk, even with modern means, without there being fissures and cracks in it.

Question: Wouldn't a series of A-frames beginning at the top of the obelisk and being succeeded by a taller A-frame, as the first for the job and so forth, cement the levers that could be filling in the space behind the obelisk with rock and dirt to the point at which the center of gravity is over the base and the obelisk was standing by itself? Would this work? This has already been suggested, a series of A-frames, and it's one of the things they're going to try in Obelisk II. Question: Would it be possible to create a supporting cage-like structure at the bottom of the obelisk made from wood?

This would have to be strong enough to withstand an impact into the bottom of the pit.


Once in, with the extra angle while the men were pulling, it could be set on fire, a wood version of the sand pit. The only problems I see are the speed of the barn and how much heat the obelisk could withstand. Good luck. I'm not sure what would happen in that case. One thing I would just note is that heat will spoil the surface of granite, and we showed that in the film, where Roger started dressing the surface of granite by creating a fire over it, and you see those big flakes pop off.

So that's one thing you might have to worry about. You might have to worry about the heat creating cracks through the granite as well. Cracks are feared by every granite worker. Even our ton obelisk, as we were pulling it out of the quarry, a very hairline crack appeared and every worker noticed it. Quarry owner Hamada went into a panic, and so I don't think he'd want to do anything, including heat, and the differential between heat and cold that would cause the granite to crack. Question: It might be easier to slide the obelisk down a concrete ramp to the anchor stone rather than drop it, using sand and creating guess work.

That way, a short, lightweight wooden test obelisk could be used to work out the proper alignment between the obelisk and anchor stone. It might also be easier to create a raised hill behind the obelisk so that the A-frame would rest above the obelisk. The pullers would be on the down slope of this hill. What do you think? And it's a good suggestion.

I do think that the pullers have to be on a ramp that's high enough and the A-frame has to be high enough that they're getting lift out of the pole, something that we've talked about in other questions. Question: Could not triangular wedges in alternation—small to large, with the small making room for the large—be used from the rear to lift the obelisk? When we were doing "This Old Pyramid," we found that wedges were one of the most useful tools of all. We actually recreated ancient Egyptian wedges, where the ancient Egyptians put handles on the wedges.

And there's nothing better when you've gotten a little bit of lift out of a three-ton block than sticking a wedge in, and you can stick a wedge in underneath to secure your lift, the lift you've gotten out of it when you have a handle on it. And also, when we were moving the obelisk that weighed 40 tons, the obelisk was so heavy it was literally crushing the rather thin rollers that we were using.

One of the ways that the workmen would get some lift out of the obelisk is to get the pressure up off the rollers to pound in wedges with sledgehammers. Wedges are just marvelous little things, and it's a very good suggestion. I think it's something they probably used in an ad hoc way, not to raise the obelisk to its final height or to a height where they could pull it upright, but wedges are very powerful little tools and very handy for a lot of lesser operations.

It is the case there was slavery in ancient Egypt. Mostly slaves were domestic slaves, though, in households. The image we have from biblical stories and so on, of masses of slaves doing great labor projects, is probably not very accurate.

Or the image we have, for example, from the film "The Ten Commandments," where the masses of the Hebrew slaves are raising the obelisks and doing other tasks is probably not accurate. There were specialists who were involved in these operations, but it is the case that prisoners of war could be assigned to working the granite in Aswan. And we do know that being sent to the granite was a punishment for various kinds of crimes. When it actually comes to raising the obelisk and pulling it, they probably would not have assigned that operation to slaves. Slaves would more have been involved in the quarries for shaping the granite, that very hard, pounding work.

The actual raising of the obelisk, when it was successfully quarried, after it had been successfully transported to the religious capital, and after it had been decorated with its hieroglyphs, was certainly not entrusted to people who were enslaved, it was probably entrusted to specialists and workers who had the same kind of spirit that our men showed from Aswan and Luxor.

Question: When are you going back to Egypt to try this again? Question: Were the pyramids built at around the same time as the obelisk? Answer: No. In fact, the gigantic pyramids that are most popular in most people's imaginations were a good 1,, 1, years before the giant obelisk was raised. That shows you how long Egyptian civilization lasted.

The pyramids belonged to the Old Kingdom, and the obelisks belong to the New Kingdom. In between Tutankeman and the pyramid of Kufu is more than 1, years. Question: Did your experience trying to raise the obelisk, but failing, give you any ideas about how to do it better? For one thing, if we had had a higher ramp which is to say a deeper turning pit, we would have gotten more lift from the tipping operation. That is to say that when we brought it over the edge of the ramp and tipped it down into the pit, and then slid it down that one side of the pit down to the turning groove, if our ramp had been higher on that side we would have gotten more lift out of the tipping operation.