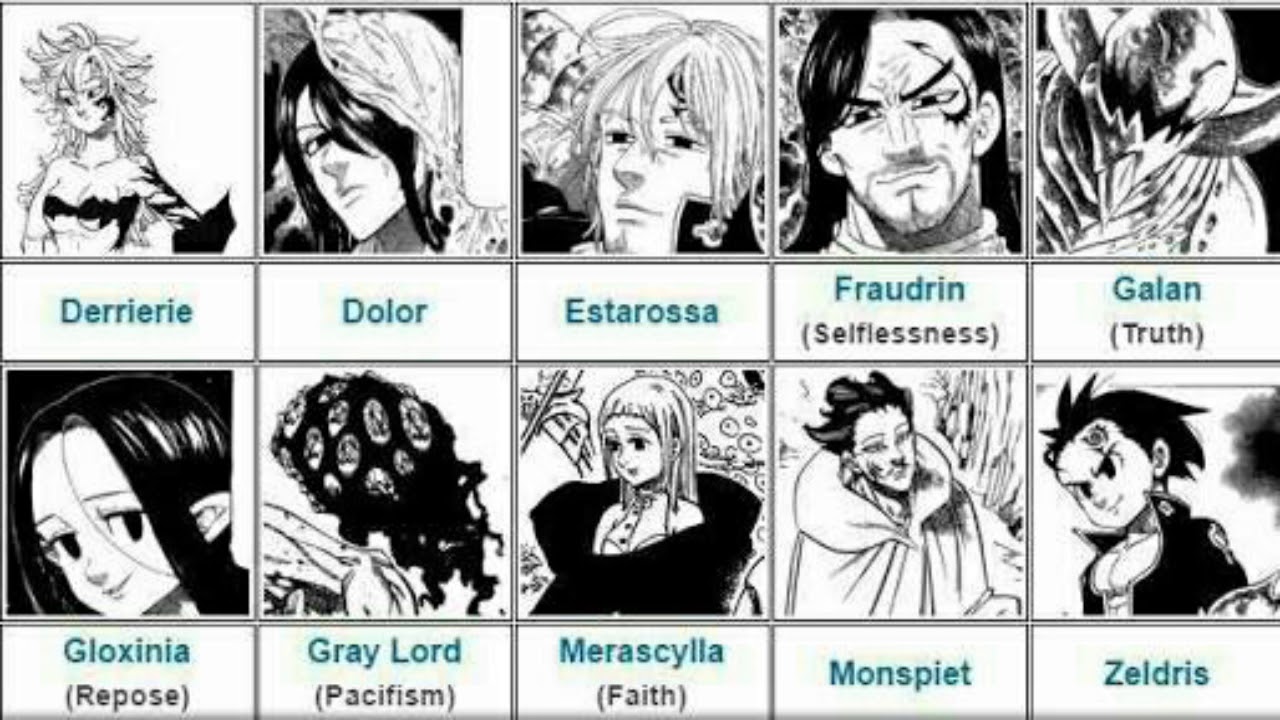 Fraudrin then asks if this was a declaration of war against Meliodas which he replies saying that this isn't war but an extermination. Still angered by his defeat and the thought of Meliodas being "beyond" him, Galand tries to claim to have been able to defeat Meliodas any time he wanted, however before he can finish his sentence he is stopped and warned about lying by Drole, questioning if he had forgotten that the Ten Commandments would incur their own curses on themselves if they break their own laws. Galand then lowers his head in response but still curses Meliodas in his mind.

The Ten Commandments then disperse, Zeldris and Estarossa, however, remain behind. Derieri and Monspeet arrive at the town of Bellford where they promptly eat many people's souls. Drole and Gloxinia arrive at Vaizel at the construction site of a new "brawl colosseum", because Gloxinia finds the site and activities surrounding it interesting.

Meanwhile, Fraudrin arrives at the town of Ferson, where he is promptly attacked and seemingly defeated by members of the Pleiades of the Azure Sky , and then taken to the research tower in Zeldon, while Grayroad watches. Meanwhile, Melascula, who teamed up with Galand, begins to resurrect the dead all over Britannia in order to wipe out the living people. Upon noticing that one of her zombies is resisting her magic, Galand and Melascula arrive to see what is happening, from there a great battle ensues between them and Fox's Sin of Greed Ban and eventually Lion's Sin of Pride Escanor which ultimately results in their defeat.

Drole notices this, as well as what happened to Fraudrin, and relays this to his partner, as they patiently wait for all the unsuspecting prey to arrive at the "Fight Festival" they are holding to draw strong souls to them as a more efficient way of recovering their lost magic power. Meanwhile, Fraudrin is being held captive by the Pleiades who intend to prove that humanity can best the ancient demons and even defeat a member of the legendary Ten Commandments. Fraudrin then reveals that he is not an actual member of the Ten Commandments, but a replacement for the missing member, Gowther.

Grayroad then appears, disguised as Dogedo to retrieve Fraudrin. Denzel Liones , the leader of the Pleiades, lets them leave being cautious of Grayroad's commandment. Fraudrin and Grayroad then walk out, with Fraudrin stabbing Deldry in the gut as revenge for their last battle. Before going, however, Fraudrin questions why he is leaving them alive, blaming his time in a human as making him soft, and decides to kill them all and destroys their base. As it crumbles, Fraudrin and Grayroad leave, ready to continue their mission.

They are later seen resting in a cave. Drole and Gloxinia decide to organize a Great Fight Festival as an efficient way to gather strong souls together. Meanwhile, Derieri and Monspeet have completely wiped out the populations of nine cities and towns in northern Britannia. Estarossa and Zeldris apparently parted ways at some points, as Zeldris went on to conquer Camelot's royal capital single-handedly.

Drole and Gloxinia's festival is short-lived, as they are unexpectedly attacked by a participant whose power suddenly spiked tremendously. Afterwards, Meliodas attacks them both, and despite their best efforts, it seems he is going to kill them. 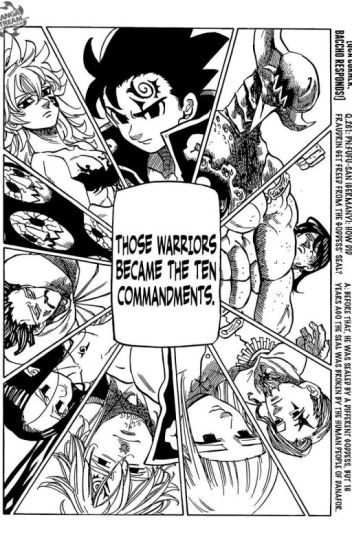 But, before he can finish them off, all the other Commandments except Galand arrive to aid them. After a grueling battle, in which Melascula is incapacitated unexpectedly by Ban , Estarossa seemingly kills Meliodas, and the eight remaining Commandments set out to solidify their conquest of Britannia. A month after Meliodas' defeat, the Ten Commandments have Britannia under their thumb.

They send out squads of lesser demons to terrorize people and stamp out any resistance and it has become common practice to sacrifice Holy Knights and other with strong souls as a form of appeasement. Some people do this to protect themselves and their families while others do it out of genuine adoration of the Ten Commandments.

Eventually, they set their sights on conquering Liones, however, one after another they are defeated by members of the Seven Deadly Sins. Estarossa and Zeldris are sent flying by Escanor, and later Fraudrin is dealt by a revived Meliodas, who definitively kills Fraudrin.

Grayroad in turn is captured by Merlin. Drole and Gloxinia are no where to be found during this great battle, attending to other matters and finally deciding to abandon the Commandments and return with their respective clans. Melascula is finally defeated by all the Sins and stripped of her powers, being also captured by Merlin. The only members still active are Estarossa and Zeldris, as Derieri and Monspeet decided to not heed Zeldris' calling to gather the Commandments and live in peace after being defeated by Meliodas. Later, when Meliodas decides to become the new Demon King to break Elizabeth 's curse, he affirms that to achieve this he must acquire the same power as the Demon King, which he can achieve by absorbing all ten commandments in himself.

Already disposing Grayroad's commandment, Meliodas allied with Estarossa and Zeldris, who already possessed the commandments of Gowther, Drole and Gloxinia and instructed them to recover the other commandments. Estarossa is able to locate a petrified Galand and kill him to take his commandment. At the same time, Estarossa would seek for the rest. He finds Derieri and Monspeet and tries to take their decrees by force, but they fight him. Monspeet sacrifices himself to kill Estarossa and let Derieri escape. Estarossa, however, was not hurt and flies after Derieri to kill her for her Commandment but finds an "even greater prize" after finding Elizabeth away from Meliodas but is attacked by Tarmiel and Sariel of the Four Archangels and is forced to take in the Commandments of Truth and Silence in order to defeat them.

A blue skinned giant with four arms and a perpetually covered face who is apparently the legendary ancestor of the Giant Clan.


At some point humans began calling him Balor, a name he resents, seemingly for that reason alone. According to the second Fanbook, he is the "Patience" of the Ten Commandments. As a Giant, Dolor has a natural affinity with earth and minerals.

By dancing, Dolor can attune himself to his surroundings and completely remodel the landscape. A large miasma-like monster with numerous gray masks adorning her body and the "Pacifism" of the Ten Commandments. Her fighting style is ill-defined, relying mostly on debilitating curses. Grayroad's best asset is transforming humans and other living creatures into powerful demons, feeding her army's ranks.

A very effeminate, child-like looking demon who was initially assumed to be a girl surrounded by giant tentacles. In reality, he's apparently the very first Fairy King who was allegedly said to have been killed by the Demon King in the war years prior. He is the "Repose" of the Ten Commandments. Much like King himself, Gloxinia also wields a spirit spear, Basquias. Most often looking like a set of cuddly tentacles, Basquias can morph at a moment's notice into a laser spear, an armor, a gigantic wasp or a rose able to cure any and all wounds.

More generally, Gloxinia can control plant life at will. These are characters who once belonged to the Ten Commandments in the distant past but for varying circumstances either left or were replaced. According to Fraudrin's suspicions, Gowther is actually one of the Ten Commandments.

More specifically, he's the "Selflessness" of the Ten Commandments. About years ago, he belonged to their ranks but due to unforeseen circumstances, he vanished and his whereabouts became a mystery. Fraudrin further explains that due to the curse of his own commandment, he lost his all of his memories, feelings, and entire sense-of-self. Consequently, Gowther himself is unaware of all of this. While Gowther was indeed a Ten Commandment in the past, there's actually much more to this Ten Commandment than simply this fact. See his entry in the Seven Deadly Sins , for tropes related to Gowther as a member of said group.

They were first seen in a brief flashback by Estarossa detailing Meliodas' past as the leader of the Ten Commandments and their names were revealed in another flashback by Fraudrin. Which one is Aranak and which is Zeno though has yet to be revealed. Originally briefly mentioned offhand in a flashback in the manga proper, it was later revealed in an announcement that they're going to be the main villains in the upcoming movie, Seven Deadly Sins: Prisoners of the Sky. In order to break the 3, year old seal on a certain demonic beast, he seeks the lives of the sky tribe people.

A demon who once served as the mentor to Zeldris. He and Chandler are actually demons far greater than the Ten Commandments. However as the goddess seal holding the Demon Clan in their prison bind more tighter the greater a demon is, they were unable to join the Ten Commandments and the rest of the demons that came out initially.

Due to effects of the seal though both Cusack and Chandler were significantly weakened and thus they were able to eventually break free. Upon escaping, they immediately decided to aid Zeldris as the majority of the Ten Commandments had been defeated one way or another by the time the two got out.

A demon who once served as the mentor to Meliodas. He and Cusack are actually demons far greater than the Ten Commandments. Posing as a talented wizard armed with innumerable spell of great potency, Chandler actually specializes in swordsmanship with a very, very, VERY long cane-sword. Has mastered Full Counter and taught it to Meliodas.